Given the tremendous progress we are going through as a society right now in elevating and empowering women, we feel it a worthy time to share a female empowerment story in one of the most legendary of animal communities - Wolves!

It’s the story of sibling rivalry, a fight for independence, breaking through societal norms, battle enemies near and far, eternal love, and utter tragedy… and it’s 100% true.

Her name - 06, a true heroine. Many know her story at a high level, but few know all the twists and turns.  Enjoy, and please pass it on!

In 1995, wolves were reintroduced to Yellowstone National Park. Over the course of the 20th century, American wolf populations had plummeted to near annihilation due to hunters and ranchers. Yellowstone was determined to help bring them back.

Here is an actual picture of the truck that delivered wolves from Canada into Yellowstone in 1995. 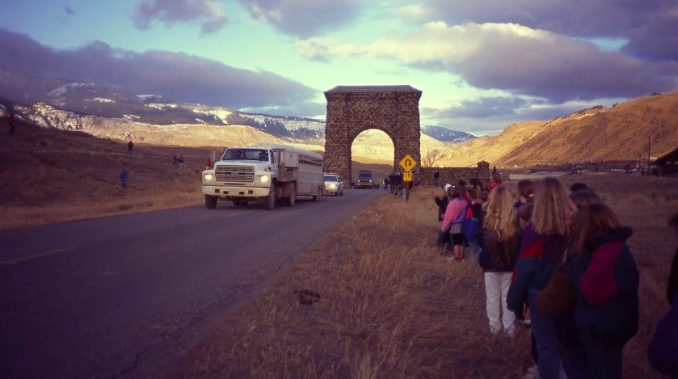 When they brought wolves back, it quickly changed and improved the landscape in ways that even the biologists did not anticipate. Firstly, Yellowstone had way more elk than it could reasonably accommodate. Wolves brought that number back down to what it historically had been prior to Europeans arriving in Yellowstone.

Man has a complicated past with wolves.  We are so intertwined in more ways than most people realize. No other animal in the world has such a synergistic social structure to us.

Both sisters were born with the desire to be on top, but they viewed that pinnacle in very different ways.  For No. 40 it was winning the heart of the finest and strongest alpha male and sitting beside him on the throne of the clan. But No.42 sought independence. She desired to be free of the natural way of the female wolf, to carve out her own plan and life independent of the dominant males or the traditional ways.

No. 40 terrorized her sister and became the popular female in the clan. No. 40 was playing by the unwritten rules of wolf society, that the males are the alphas and the females support their male pack leader.

No. 42 could not be bothered with clan politics; she knew better than to directly engage with her bullying sister. She spent her time often in isolation, learning about the world around her, observing things other wolves had no interest in, and practicing her fighting skills in private where nobody could see.  Her indifference towards her sister only angered her sibling even more. Other wolves in the pack began to egg on No. 40 about her younger sister’s disrespect towards the ways of the pack.

One night, human observers noticed No. 40 leave a hunt in the middle of the night and head towards the den of No. 42. She was going to kill her younger sister once and for all...

Moments later, No. 42 walked out. Her fur ragged, stained with a reddish hue.  No. 40 older sister did not anticipate the preparation and training of her sister. No. 40 was dead. No. 42 had fully freed herself from the shackles of her sinister sister. 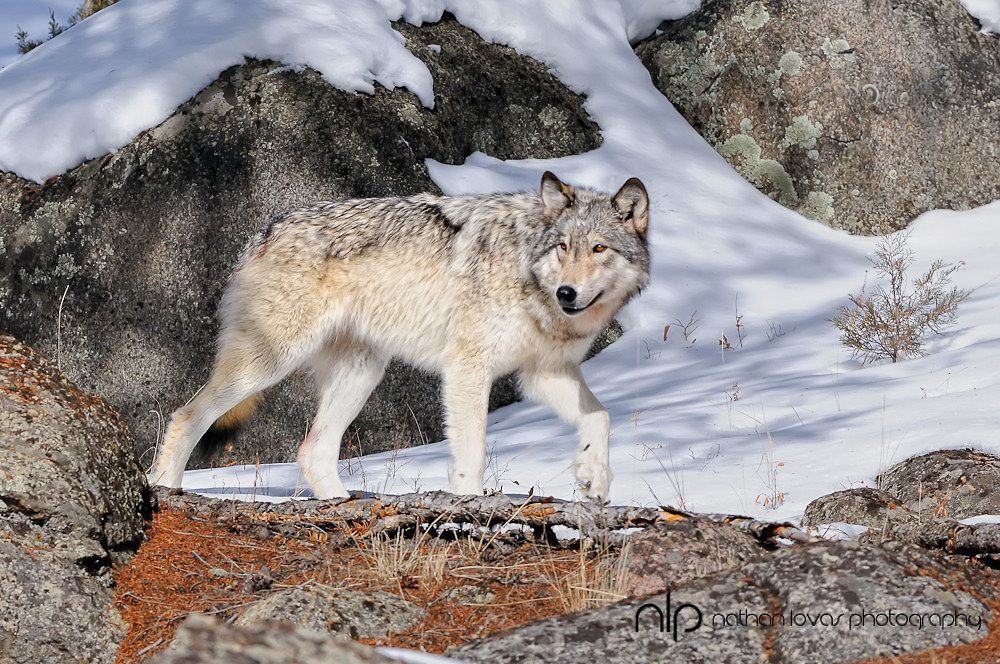 No. 42 would go on to mate with No. 21, another pretty legendary wolf. Their oldest daughter was named 832F by scientific observers, but went by 06 for the year she was born.

Scientists noted early on the incredible combination of power and inquisitive nature of 06. She had deep set brown eyes, with a gaze that was deep and deliberate.

No. 42 took special attention to 06, passing on her skills and knowledge, and most importantly her fiercely independent female spirit.  06 was destined to take her mother’s mission even further, to forever redefine the role of the female alpha.

By the time she was two years old, 06 was the crown jewel of male attention. Males came from packs all over Yellowstone to make an attempt to win over 06. But she had no interest in simply being someone else’s alpha female.

Shortly after she turning two, 06’s father passed away...

06 knew she had to set off on her own. Her mother was older, she would have to bring in a younger male to help lead and protect the pack, but 06 was not interested in being ruled by a new male. With her mother’s blessing, she set off. It was always her fate, to forge her own path.

It’s dangerous for wolves to wander like that, trying to find a territory. Most of them end up going back to their natal pack or being killed by rival packs. But she had a knack for avoiding trouble and was very socially adept and skilled at navigating territorial rivalries. 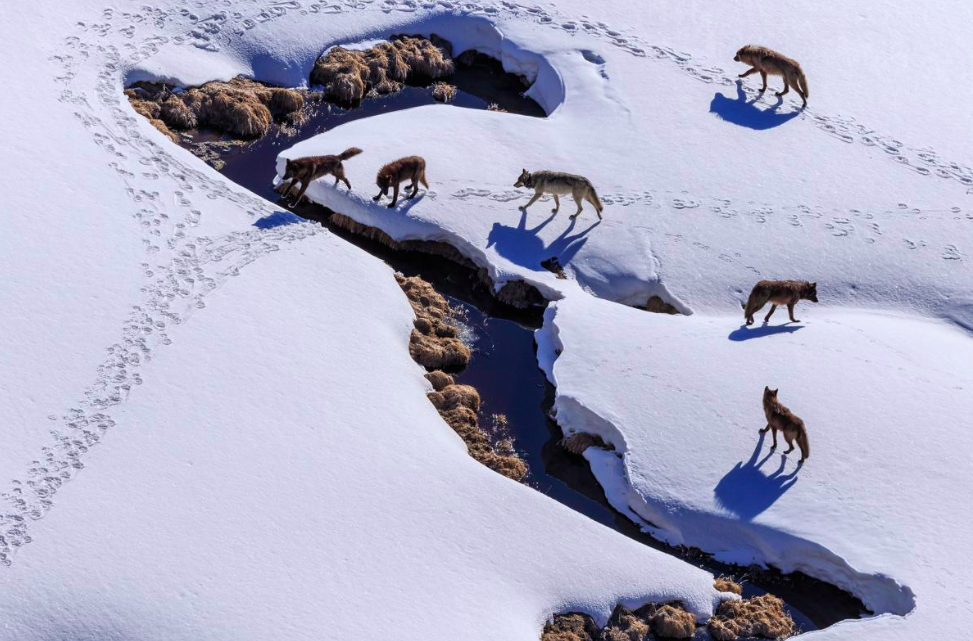 Researchers noticed that 06 struggled to eat in her early days of full independence. Big game such as Elk always required a pack, even for the most skilled of wolves. Elks after all are 700 pounds compared to an average 125 pounds for an adult gray wolf.

So she feasted on smaller game such as prairie dogs and rodents, leaving her scrawny and weakened. Knowing she needed her strength to improve her hunting skills to take down bigger game, she used a little romance to get what she needed.

She began mating with multiple male suitors but never fully settle down with any. She used them for the meat of their pack hunts. By the time she got her strength back, she decided to play a new game altogether.

She allowed two brothers to live with her side by side.  They both yearned to mate with 06, but she made them wait it out to prove which one was worthy, all the while leveraging them for protection and hunting. It was a site researchers say they had never seen in wolf behavior.

When she finally chose, mated, and gave birth, she still had both brothers bringing her food. As soon as her pups grew old enough, she set back out on her own, this time with pups in hand.

A lone female with yearling pups and no alpha male - she was the first of her kind.

She did what all great single moms do - never complain and always figure it out. (Let's pause here to give a shout out and thank you to all the single moms out there. Their sacrifice, fight, and dedication to their kids above all else deserves more recognition!)

As her pups slept she sharpened her hunting skills, moving up to larger and larger game.Then came the feat no researcher has ever seen.

06, on her own, without the help of any other wolf, took down an Elk. An animal five times her size, with speed, strength, and the fight of any creature battling for its life, succumbed to 06. This was a new pinnacle of hunting ability.  It’s hard to put into words how impressive this feat was. This was Jesse Owens, Aly Raisman, Billie Jean King type material, only greater. 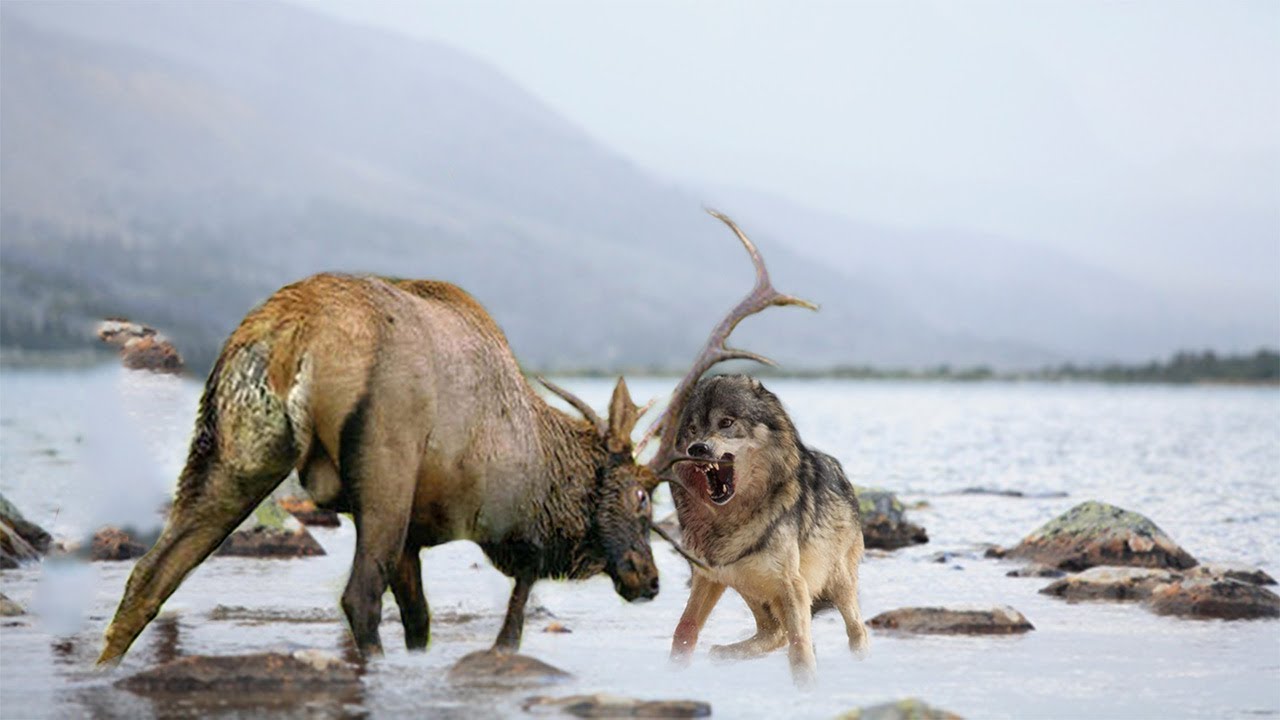 From that point on, her pups grew stronger than ever, because big game was back on the menu. Their mother was a source of survival and inspiration, every single pup in her litter also went on to be an alpha.

06’s family life still was not without its struggles. The biggest pain came from a nearby rival pack, the Mollys.

The Mollys were a strong wild bunch that had a tight family bond and were keen hunters. They howled endlessly at night reminding everyone of their presence. They are a bit like the Lannisters from Game of Thrones.

One day, researchers saw sixteen Molly wolves chasing 06 through the woods, determined to kill the famous female.  She was luring them away from her den.

She found her way into a hidden gulley.  The Mollys lost her trail, and instead double-backed to the den using 06’s scent.

06’s oldest daughter heard them coming.  She braved her way outside the den to act as a decoy. At this point the Mollys were lathered with their own saliva, starving for a kill of any kind. They saw the young wolf and went after her, forgetting about the den.

06 knew which of her pups to train as a decoy - the fastest one. Her daughter outran the sixteen Molly wolves until they eventually gave up from exhaustion. Meanwhile, 06 hurried back to the den and led the rest of her pack to a new distant location she had already primed in case of such an event. And her eldest daughter was there to meet them. 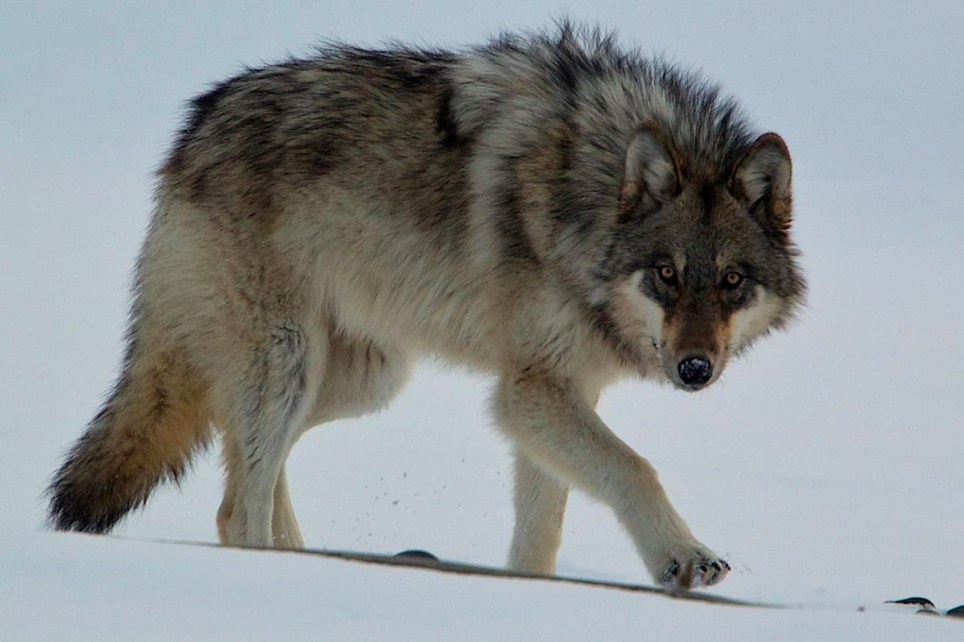 06’s oldest daughter heard them coming.  She braved her way outside the den to act as a decoy. At this point the Mollys were lathered with their own saliva, starving for a kill of any kind. They saw the young wolf and went after her, forgetting about the den.

06 knew which of her pups to train as a decoy - the fastest one. Her daughter outran the sixteen Molly wolves until they eventually gave up from exhaustion. Meanwhile, 06 hurried back to the den and led the rest of her pack to a new distant location she had already primed in case of such an event. And her eldest daughter was there to meet them. 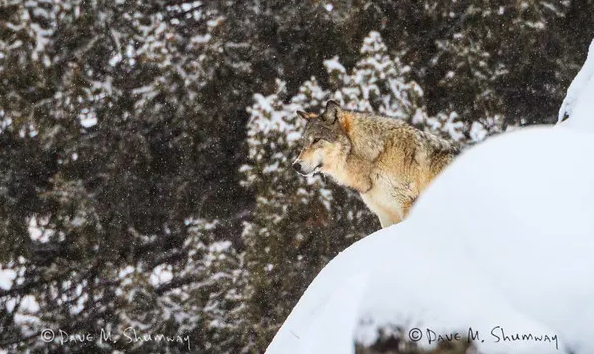 Death to a Legend

Although tragic, it’s fitting in a way that 06 was ultimately killed not by the wolf community she reverently evolved, or the elements she braved through, but by the most dangerous, unforgiving predator in the world - humans.

The state of Wyoming had removed wolves from the endangered species list, making them legal to poach outside their protected area in Yellowstone.

But of course wolves have no idea when they are crossing those invisible protected lines or not. There is no fence or other deterrent. 06 crossed that line in December of 2012. And a trophy hunter took advantage, shooting down the legendary wolf as she studied the new territory.

It was a deeply tragic day that hurt so many of 06’s supporters across the world. The most famous wolf had died. The wolf who defied all odds. The wolf who reshaped female identity and norms. The wolf who had endured so much, was killed so quickly, so cold heartedly, so pointlessly by a human.

06’s daughter named 926F, pictured below, would also tragically be killed by a hunter in November of 2018.

At Animalia, we honor the life and lineage of 06.

Thank you for all you stood for, all you accomplished, and all you taught us. 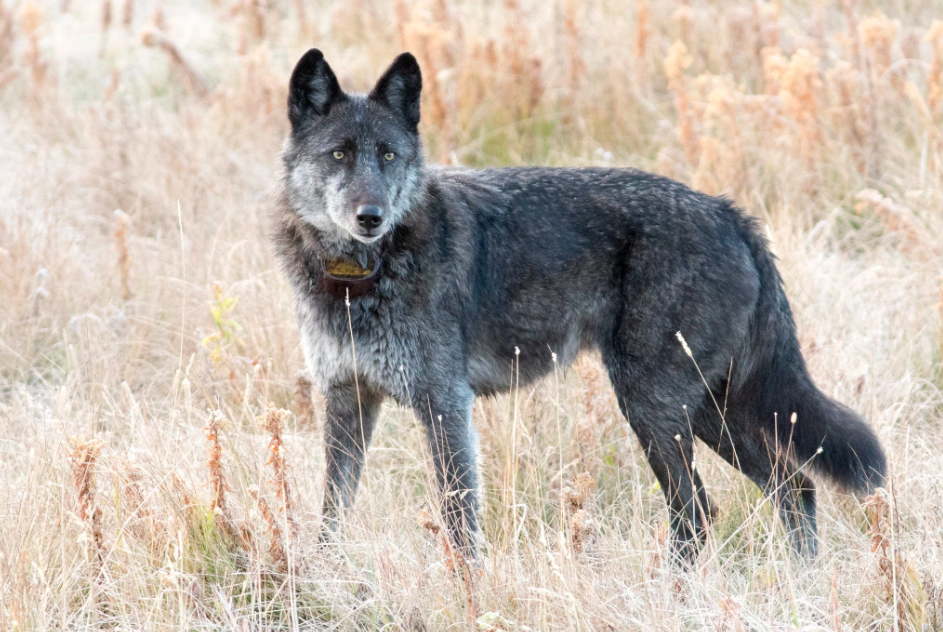